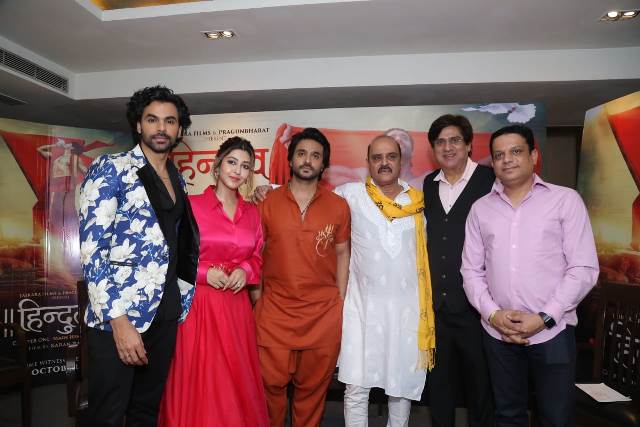 New Delhi Hindustan ab tak/Dinesh Bhardwaj : Recently, Starcast of Movie Hindutva Ashiwsh Sharma, Sonarika Bhadoria , Ankit Raj and Mukesh tyagi came to Delhi for the promotion of their upcoming movie Hindutva. The event was held at The Lalit hotel, Delhi. The movie is all set to release on 7 October 2022 in theatres.

Hindutva is a story of today’s youth. The film explores the depths of Hinduism through its principal characters. It is a story of friendship, love and student politics. The film is produced by Sachin Chaudhary and directed by Karan Razdan.

While speaking to the Media Sonarika Shared, “ When I heard the title of the movie Hindutva I was a bot scared as When we hear this word we recall some groups and I was a not aware of our social-political environment at that time. But as I heard the story I found it to be totally non-controversial. “