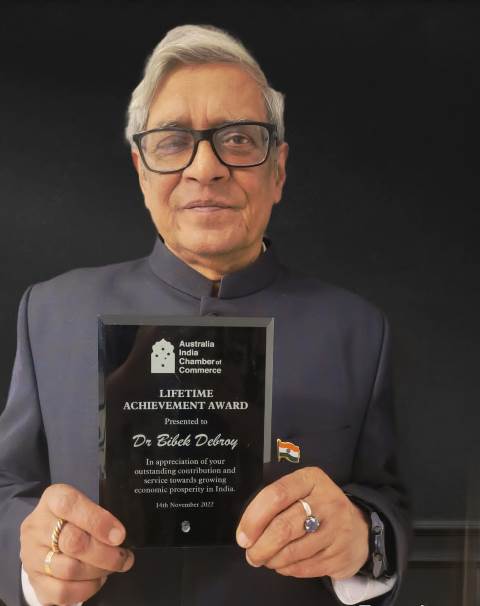 New Delhi Hindustan ab tak/Dinesh Bhardwaj : India’s top economist & Chairman of the Economic Advisory Council to the Prime Minister (EAC-PM) Bibek Debroy was recently conferred a Lifetime Achievement Award by The Australia India Chamber of Commerce (AICC), a business network that seeks to facilitate, nurture and transform Australia-India business. This highly coveted honour was bestowed upon Padma Shri Bibek Debroy In appreciation of his outstanding contribution and service towards growing economic prosperity in India. Australia’s Department of Foreign Affairs and Trade (DFAT) has a Special Visit Programme under which distinguished visitors from overseas are invited to visit Australia, to understand Australia and to have discussions with their counterparts in Australia. Under this Special Visit Programme, Bibek Debroy visited Melbourne, Canberra and Sydney from 13th November 2022 to 21st November 2022. Other than discussions and talks, he delivered a special lecture at the Australia India Chamber of Commerce on 14th November 2022, outlining the course and trajectory of India’s reform. The event was held at the Australian Club (The Gallery), Melbourne. The award was handed over by Chris J. Mooney, Chairman of the Australia India Chamber of Commerce, in the presence of Harish Rao, the Executive Director of AICC. Accepting the award, Bibek Debroy said, “I accept this award with all humility. There are many I have received in the course of my life, but this is one I will always treasure, as a reminder of the close ties that bind India and Australia.” Educated in Calcutta, Delhi and Cambridge, Bibek Debroy has worked in the realm of academia, the government and research institutions. Niti Aayog (the successor to the former Planning Commission) was set up in January 2015 and Bibek Debroy was a Member of Niti Aayog from January 2015 till August 2017 after which he became the Chairman of the Economic Advisory Council to the Prime Minister. Bibek Debroy has worked on poverty, inequality, development, governance, law reform and international trade issues and has been the Chairman of a Committee set up by the Chief Minister of Jharkhand (2010-12) to recommend a development plan for the State and a Member of the Rajasthan Chief Minister’s Economic Advisory Council (2014-15). He was also Chairman of a High-Powered Committee for Restructuring the Railways, set up by Union government (2014-2015). From September 2018 to September 2022, he was the President of the Indian Statistical Institute. He has received several awards in the past including Honoris Causa D.Litt, D. Phil and D.Sc. degrees, Lifetime Achievement Awards by US-India Business Summit (2016), Prestige Institute of Management and Research (2018) and Skoch Foundation (2022) and Padma Shri (2015). An astute scholar, Debroy has translated the unabridged version of the Mahabharata into English, in a series of 10 volumes. He has also translated the Bhagavad Gita, the Harivamsa, the Vedas and Valmiki’s Ramayana (in three volumes). He has translated the Bhagavata Purana (in three volumes), the Markandeya Purana (one volume), the Brahma Purana (two volumes) and the Vishnu Purana (one volume). He is only the second person to have translated both the Mahabharata and the Ramayana, in unabridged form, into English.