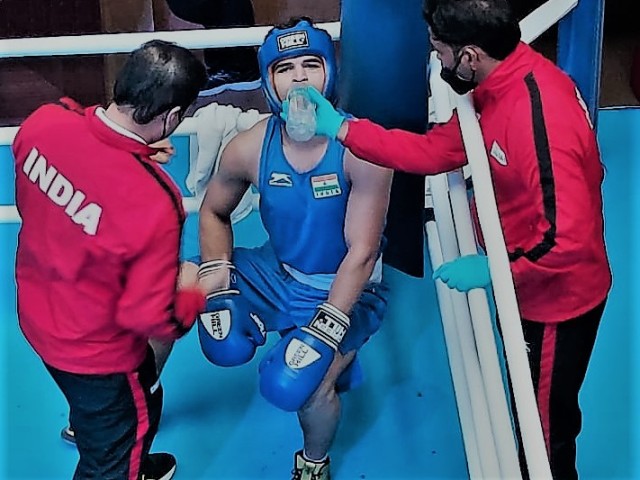 Haryana Boy Ankit, who has won three successive Gold Medals at Khelo India Games displayed his brilliant attacking prowess and started with a flurry of punches from the start to register a resounding 5-0 win over Uzbekistan’s Lazizbel Fattoev and moved to the quarter-finals where he will face Ukraine’s Ratmir Turchaninov.

It wasn’t a flawless day for India though as Meitei Sanjarmbam (56kg) and Vishal (7kg) lost their pre-quarterfinal bouts against Ukraine’s Dmytro Todorov and Ukraine’s Nurisiom Ismoilov respectively.

Later tonight, 7 Indian boxers will be looking to secure a podium finish when they enter the ring for their Quarter-final bouts. 2018 Best Asian Women’s Junior Boxer Arundhati Choudhary (69kg) will be looking to start her campaign with a win, when she faces Finland’s Evelina Taimi, late on Thursday night.

Other Women boxers in the quarters and in fray for the medal are Babyrojisana Chanu (51kg) and Vinka (60kg). Meanwhile, 4 Men Boxers, Arambam Naoba Singh (52kg), Sumit (69kg), Vishal Gupta (91kg), Jugnoo (91+ kg) will be in contention for Bronze Medal tonight.

The 30th edition of the Adriatic Pearl Youth Tournament will go on till February 22. And with the presence of strong competition from twelve countries including boxing powerhouses such as Russia and Ukraine, the upcoming tournament will provide a good opportunity for Indian youth boxers to get into much-needed match practice ahead of the AIBA Youth World Boxing Championships which is scheduled in Poland from April 10-24.