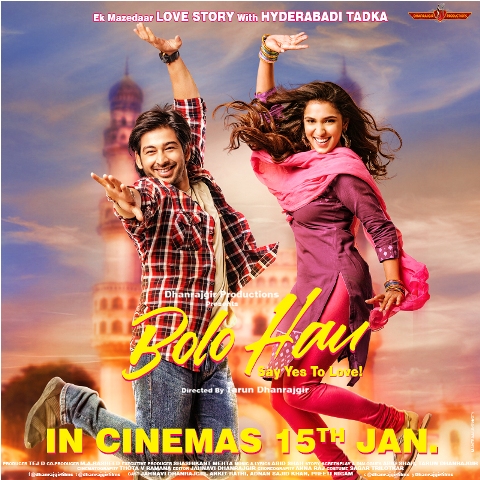 New Delhi Hindustan ab tak/Dinesh Bhardwaj : Covid- 19 pandemic upended the entertainment industry, forcing theatres to shut for about eight months to contain the spread of the virus while pushing all the money spinners and ready to release titles of 2020 to resort to sundry OTT platforms. Now with theatres re-opening, Bolo Hau is slated to hit the big screens on 15th January 2020, making it the first Hindi release of 2021. The trailer of the film was released digitally today.

A frothy love story set in Hyderabad, Bolo Hau will see editor turned actor Jahnavi Dhanrajgir making her on screen debut. Ankit Rathi who has played a substantial role in Farhan Akhtar produced 3 storeys and earlier in Singham 2 and Fukrey, plays the male lead in Bolo Hau. Jahnavi on the other hand has been an assistant editor on superhit Bollywood films like Gunday and Kick and worked as an assistant director on Sultan prior to her acting debut. Directed by Tarun Dhanragir who had played the role of Darcy in the Indian remake of Pride and Prejudice which was aired on Doordarshan in 1985 and featured in other prominent soaps of the era, Bolo Hau, is a frothy romantic comedy that seamlessly turns into an intense drama.

Speaking about Bolo Hau, Director Tarun Dhanrajgir said, “The trailer is receiving good response and I’m looking forward to the release of the film next month. If you come to look at it, Bolo Hau is becoming ‘a first’ on many instances- it’s my daughter, Jahnavi’s debut. This is also the first film for my banner, Dhanrajgir Productions and the first Hindi release of 2021. I hope this film encourages our movie business to open up gradually and go back to its original glory”.