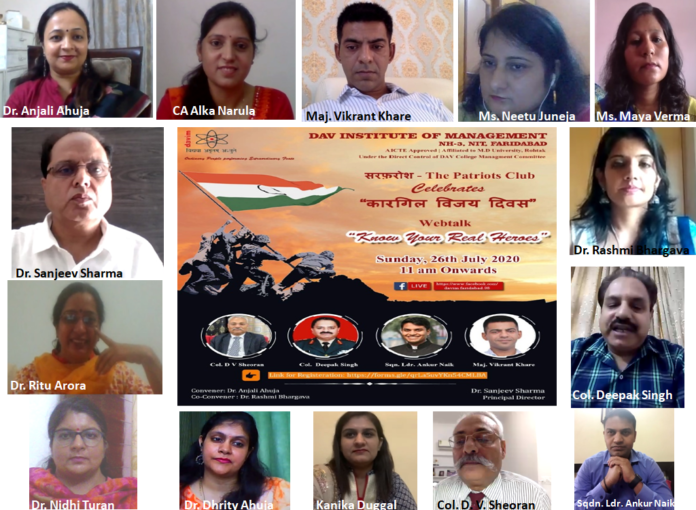 Faridabad Hindustan ab tak/Dinesh Bhardwaj : Every year July 26 is as ‘Kargil Vijay Diwas’ to remember the success of Operation Vijay in 1999 Kargil War. This year marked 21st anniversary of India’s victory and it is a moment of great pride for every citizen of this country. To pay respects to the Jawans who sacrificed their lives on the battlefield, SARFAROSH – The Patriots Club of DAV INSTITUTE OF MANAGEMENT, FARIDABAD organized a Web talk on “Know Your Heroes” under the superintendency of Principal Director, Dr. Sanjeev Sharma.

To commemorate Kargil Vijay Diwas, ‘Reminiscence’ an Inter College Competition was organized in which events like Poster Making Competition (Srijan) and Hindi Poem Recitation Competition (Kavyanjali) were held. Plethora of entries from all over the North India were received which levelled up the competition. The theme of both the competitions was Kargil Vijay Diwas.
The initial deliberations of the event were shared by Dr. Dhrity Ahuja followed by the welcome address by Principal Sir. Introduction to the theme of Web talk was given by Dr. Anjali Ahuja, Convener and introduction of honorary speakers was given by Co – Convener, Dr. Rashmi Bhargava. The esteemed speakers of the day who illuminated the event with their intriguing experiences were Col. D V Sheoran, Col. Deepak Singh, Sqn. Ldr. Ankur Naik and Major Vikrant Khare. Col. D V Sheoran shared the life experiences of a soldier and motivated students to join Indian Army. Col. Deepak Singh focused on his bitter sweet experiences of Kargil War 1999. Sqn. Ldr. Ankur Naik motivated the viewers by sharing his experiences through riveting stories. Whereas, Major Vikrant Khare astonished the virtual audience by connecting Army experiences with civil life. 1000 plus viewers within an hour and chat box flooded with queries were the evidence of event’s success. Some of the queries were taken up by Ms. Kanika Duggal and answered by the worthy speakers.
The results for the Competition were announced in an enthralling manner by Dr. Nidhi Turan and CA Alka Narula. In Poster Making Competition (Srijan) Heena Kapoor (DAVIM) bagged first prize, Mehak Gaur (DAV Centenary) and Pushpanjali Choudhary (DAVIM) were the first and second runner up respectively. Whereas, in Hindi Poem Recitation (Kavyanjali) there was a tie for first position which was bagged by Aashika Garg (DAVIM) and Vikas Silwani (DAVIM). The second and third position were held by Yugi Gupta (Lloyd Institute of Management & Technology) and Sweety Kashyap (DAV Centenary) respectively.
The other members of Patriotic Club who worked behind the scenes were Ms. Neetu Joneja, Ms. Archana Mittal, Ms. Maya Verma, Ms. Esha Khanna, Mr. Prince Ahuja and Ms. Akansha Sharma. The closing remarks for the event were given by Dr. Ritu Gandhi Arora, Vice Principal & Registrar (DAVIM) and a formal vote of thanks was extended by Dr. Rashmi Bhargava. The event concluded with National Anthem.