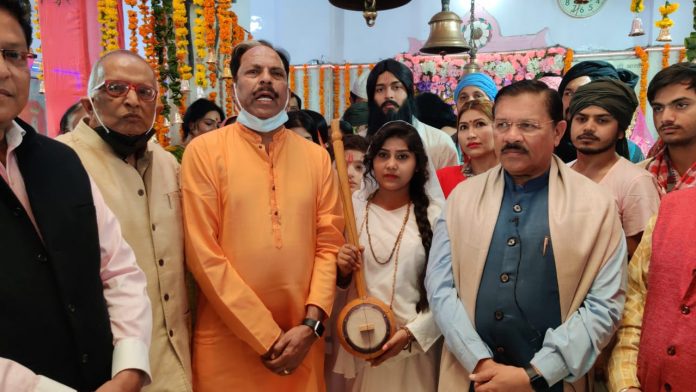 New Delhi Hindustan ab tak/Dinesh Bhardwaj : Recently, the inaugration of TV serial Sant Shri Guru Ravidas was held in Shri Guru Ravidas Vishram Dham Mandir,Karol Bagh, Delhi.It is the first ever TV show which is based on the life of famous 15th century spiritual Guru Ravidas Ji. The shooting of the show will be held across cities like Delhi, Haryana , UP and Maharashtra.
Mr. Shyam Jaju,Politician and Ex – National Vice President of Bharatiya Janata Party was invited to the ceremony as the chief guest.Actor Radhe Shyam will portraying the role of Guru Ravidas and Actress Rupanjali Tank will be seen as the wife of Guru Ravidas. The TV show will be aired on Doordarshan Channel and it will be shot according to the audience of Doordarshan chanel.
0Present at the event, Producer, Puran Dawar shared , “On the auspicious occassion of Shri Guru Ravidas Jayanti we are starting the shooting of the show and this is the first ever show based on his life through which people will get to know about his life journey which will inspire them.”
Director Vijay Sharma added, ” We have researched alot about the life of Guru Ravidas ji, spoke to the people and after that we decided to shoot a 52 episode show. Guruji was a part of Bhakti Movement, we will portray his life journey from his childhood for which we will prepare the sets as it is difficult to find locations which are similar to that era.”