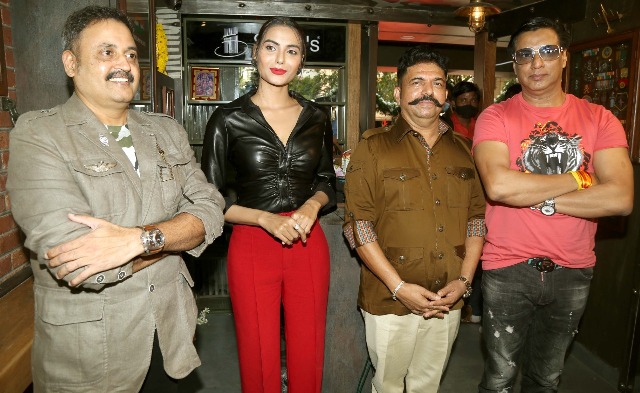 Mumbai Hindustan ab tak/Dinesh Bhardwaj : Shiva’s SALUTE salon – the third in the series from the house of Shiva’s – opened in upscale Kandivali in North Mumbai on the auspicious occasion of Dussehra.

After making waves in the queen of suburbs, Bandra and then in upmarket Vile Parle, this salon, more bigger and spacious, similarly emulates life in a military barrack with all the paraphernalia showcasing on walls and cupboards. Police insignia too are prominently displayed.

“This salon is dedicated to all the security forces,” said DCP Vishal Thakur after cutting the ribbon and inaugurating the SALUTE salon. He wished Shiva’s SALUTE the best and praised the efforts made to collect many items, photos, badges and symbols connected to the military and police forces.

All insignia and emblems are replicas sourced from various outlets by Rajeev Khandelwal, filmmaker, who has meticulously curated and designed the SALUTE salons. A great amount of care and attention is paid to respectfully display each piece with due honour within the salon.

A military Jeep and motorbikes are stationed at the entrance, a gun barrel assault rifle with a flower on top serves as a handle of the main entrance door, military boxes, kits, bullet boxes, old-styled helmets of Navy divers, small imitation models of aircrafts used by the Air Force and many such interesting trivia are displayed. They are sure to educate the young urban generation who perhaps know little about the real life of the India forces. The wall décor of green and brown colours match with the attire worn by the staff, they resemble military fatigues.

Besides, a cupboard is filled with archaic barber tools made of heavy metal and sharp knives that only a deft hand could use proficiently are an eye-opener to what a working life of a barber may have been decades ago. These equipment are rare in use now with the advent of modern and electronic gadgets and with the changing face of the salon industry.

The house of Shiva’s is a chain of more than 23 salons located across the length and breadth of Mumbai. They are known names in Bollywood circles, besides having a large clientele from the glamour, fashion, television and the corporate world. Shiva runs an Academy to train youngsters, in hairstyle and beauty, from minority communities and the poor, for free of cost.

At Shiva’s SALUTE, hairstylists are trained to offer military-styled haircuts and the overall look. The SALUTE series makes an effort to remind Gen Next that the Indian Armed Forces are vigilant 24/7 to defend our borders and our country. They are always there to provide invaluable help to the people of India during all calamities.